Last fall Matthew Swinnerton started Event Santa Cruz as a way to showcase Santa Cruz businesses and the people behind them.

One year later Event Santa Cruz is about to celebrate with their biggest event yet.

The Event Santa Cruz One Year Anniversary event is Thursday, September 18 at the MAH, and it features an impressive lineup of speakers, a ribbon cutting with the Santa Cruz Chamber of Commerce, networking, and food and drinks courtesy of Pono Hawaiian Grill, Brew Cruz, and Allterra Solar.

In the first year Event Santa Cruz gave local business owners, and entrepreneurs of all types, a chance to gather once a month, share their stories, inspire, get inspired, and strengthen the local business ecosystem in the process.

When asked what went well, and maybe not so well, during the first year, Swinnerton said, “The highs were the individual moments, the speakers who put the effort into making amazing short presentations. It’s not an easy thing to do for most people. The speakers are there with nothing to hide behind, just them, a microphone and a spotlight.”

It’s hard for Swinnerton to name a favorite event during the first year, but a few did stand out in his mind, “I really liked our first Extreme Sports Entrepreneur night, The Ted Holladay Roast, The Ian Bell shows, and The NEXTies. The list can really go on and on. I am not just saying this, but I think the Event Santa Cruz One Year Anniversary Night on Sept. 18th is going to be the big one though.”

Event Santa Cruz took a brief hiatus during the summer months, but they’re back with a big event planned right out of the gate, and more to come throughout the year.  Swinnerton doesn’t offer specifics, but it sounds like he’s going to keep things fresh and interesting for year two.

“The plan for Event Santa Cruz year two is to be more creative. You can’t keep doing the same thing over and over. It gets stale. I want to do the event at non-traditional spaces. We had a great time at The Nick. It was a great place to show our intro video and just made it feel like a special event to have it at a movie theater. But now I am on the hunt to find locations that would not be a usual place for an event, especially an event for entrepreneurs. Maybe an open warehouse, an undeveloped space, a cellar, etc… So if anyone knows of a good location that fits that description let me know.”

Swinnerton always seems to be up to something new.  In addition to creating and running Event Santa Cruz he is a co-creator of TechRaising, he organizes the Nexties, manages local musicians, and most recently accepted a position as Marketing & Business Development Manager of Think Local First.  Oh, and he’ll be hosting a new Think Local First radio show on KSCO, featuring TLF business owners in weekly roundtable discussions.  The first show is tomorrow, Sep. 13, at 2:00 pm.

So, what motivates Swinnerton to take on so much?

“I love building things out of nothing,  I am inspired by people who do that. So what motivates me is the people. If you look at all that I do, it really comes down to people. Everyone has a story and the story I like to hear about is how people and why people make things happen. And what I get to do is package that story and make a show with it.”

And the next show is one you won’t want to miss.  The One Year Anniversary show features a great lineup of speakers:

The speakers are the highlight of the evening, but come early to network, and to celebrate the Event Santa Cruz ribbon cutting with the Santa Cruz Chamber: 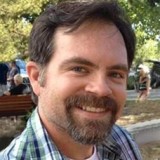