All photos by Valerie Lemke

Be sure to read to the end; we’ve got a treat for all you sunset chasers out there 🙂

When I moved to the rural mountains of Santa Cruz County 26 years ago from the Bay Area I didn’t hesitate or have any regrets. There hasn’t been one time that I looked back.

I remember the first day I began my 1.5 hour commute over the hill to work, too. Though I knew it was going to be tough, I was ready. I was full of excitement and I couldn’t wait to tell my urban living co-workers two important breaking news stories that involved that first morning.

Those were two things that just about blew this former city dweller away. As exciting as those events were to me, I soon realized I was the only one who was so greatly amused by those facts. Those blank-eyed blinking stares from my coworkers said it all. But, all I knew was that this was going to work out just fine.

However, what I didn’t expect to find here was what I found that very night:

Of course I love sunrises, star and moon filled skies too, but there is something about how a sunset ends the day and wraps it all up in one single breathtaking moment. No matter how stressful or frustrating the day would be, I could just throw it all into the ocean and watch it all be swept away into the night by the sinking sun. Eventually life happened as it does, and thankfully I found myself as an ex-commuter from over the hill and began working locally. Though I enjoyed sunsets now and then when I could, life was busy.

As some of us locals may know, the slow and meandering drive along the coast from Santa Cruz to Capitola is a great way to unwind after work. I did this when time allowed over the years. But, there was something about one special night that was so very different.

As I approached Capitola Wharf, the sun had set and the sky was a deep periwinkle blue that had a hint of purple and cotton candy pink mixed into the clouds. I had to stop and look out over at this view of the wharf. The lights in the buildings of the village sparkled as dusk had settled in. It was calm, beautiful and oh so very surreal. I wanted time to stop, and I wanted to save that moment forever.

Then I remembered that I had my small handheld camera in the car with me. There actually was a way that I could actually stop time and capture a piece of it. I was a born weather-chaser anyway, and anyone who knows me has probably figured that out. Just give me a good weather adventure and I’m game…

Though sunsets aren’t technically dangerous unless you fall off a cliff or something, they can still be intensely dramatic and thrilling while stirring those feelings of adventure. It can stop you dead in your tracks, take your breath away and bring tears to your eyes. Everything else is forgotten. Time seems to stop, and for a brief period you are doing something that is almost impossible in our busy times…you are actually living in the moment.

A few weeks after that night at Capitola Wharf, I found myself at Rio Del Mar during what I know now is called “ the golden hour”. That is the hour before sunset where everything shines in a golden light. My daughter and I found ourselves right in the middle of a mind-blowing sunset and I knew instantly that I had to capture that night. But this time I had already brought my camera, just in case. I was bitten by a bug that was similar to the draw for storm-chasing. It was thrilling and an adventure. I realized that night that it was now set in stone. I was an official sunset chaser.

From there, you might say it was a slippery slope with camera gear purchases and a ton of time experimenting . You might also say that I had fallen down quite the rabbit hole. But in my case it was money and time well-spent. I had done stumbled across the thing I was meant to do.

However, it doesn’t require money or a lot of time to chase sunsets. You don’t need a camera or special equipment other than your own eyes. Why not give it a try?

People come here for a lot of reasons, but I hope they stay for the sunsets. I know I did. This comes with a disclaimer: you could become addicted.

Are you a sunset chaser?

We just created a new Facebook group called Santa Cruz Sunset Chasers and it’s a place for everyone in Santa Cruz County to post and admire photos of our beautiful sunsets (sunrises too!).

We’ll be sharing our sunset photos and videos (like the one below) in this group, and invite you to do the same. 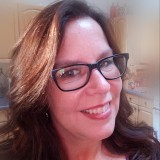 Valerie Lemke is a transplant from the Bay Area to Santa Cruz County over 25 years ago, and hasn't looked back since. She is a local freelance writer and photographer who loves writing about and photographing one of the most beautiful regions in the world, the Central Coast.

Get a weekly digest of all the best events in Santa Cruz County! Get a weekly digest of all the best events in Santa Cruz County!