Whether you’re an avid surfer or just an ocean lover, the 19 films featured at the inaugural Santa Cruz Surf Film Festival are guaranteed to tell a story you’ll want to watch.

Taking place at the Del Mar Theater September 24th and 25th, and the Rio Theater on the 26th, the festival features 6 different screenings of short and long films from all over the world, with a focus on issues, people and places in surf culture. None of these films have ever been screened in Santa Cruz before, and this may be your only chance to see them on the big screen!

The final selections were curated from over 60 entries, with the criteria that they present compelling stories, beautiful cinematography, and exciting surf scenes. Each screening will include one long (over 30 minutes) and several short films, totaling about an hour and a half of screen time. There are also a whole slew of captivating shorts — too many to describe — but one short that’s strangely flown under the radar in the surf world is Ben Gulliver’s 22-minute picaresque tale of camping and surfing in Canada’s northwest island chain of Haida Gwaii. Staged with a quirkiness and cinematic detail that bears homage to Wes Anderson, among breathtaking landscapes, this short film is not to be missed.

Every screening will feature giveaway prizes from sponsors including O’Neill Surf Shop, ZEAL Optics, and Escape Campervans, and the first 25 people in line at each screening will receive a limited edition tote bag full of sponsor goodies.

11 countries and 4 continents are represented by this year’s official selections, and each of the six programs will take you on an unforgettable journey. So, if you love watching surfing, traveling to exotic locations, or just appreciate a good story, come out to what will be the first of many Santa Cruz Surf Film Festivals to come. 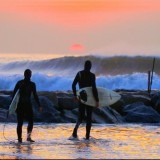 Delphine Foo-Matkin recently finished a 2-year adventure surfing around the world with her husband and blogging along the way at Surfing Round The World. Her passions include writing, learning new skills, exploring Santa Cruz, and crafting with fibers and fabrics, but her first love will always be surfing.